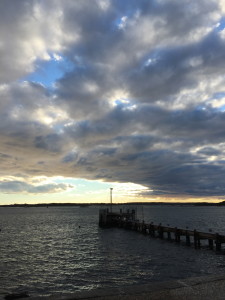 “Have you ever seen anyone die before?” my cousin asked me, from across the bed.

“Sure I have, plenty of times,” I answered.

We were flanking her father, my uncle (really, my mother’s cousin, but extended Greek families are complicated; suffice it to say that our families are very close). He had just taken his last breath.

My uncle had been declining for several years with Lewy Body Dementia, and it had been accelerating over the past year or so. It was stealing him away, his mind anyway, though until lately his body remained strong. He wasn’t even on any medications, except the Exelon patch and Namenda to slow the dementia, remarkable for his 88 years. Last fall he had an “episode” for which he was hospitalized, and his doctors indicated that it was likely progression of his disease; so from then on, he had been cared for with hospice assistance. His death was certainly not imminent, within days or weeks, as one usually thinks with hospice involvement, but it was inevitable. There was not much to do from a palliative point-of-view, there simply wasn’t anything else to add to or to enhance his care. But as he declined, his family— especially my cousin — were going to face some hard choices about how best to care for him. The resources in the home, even with hospice and aides to help in his care, were rapidly becoming inadequate. As it turned out, they did not have to worry any more about breaking the promise they made to him.

That afternoon I went to see my uncle, who had been living with my cousin for the past few years. I had been texting and emailing with her over the prior week, after he had another “episode”—this time more severe, like a seizure or even a stroke, from which he was not waking. He had not had anything to eat or drink for about a week, and had stopped voiding for the past day or so. He would rouse slightly, then drift back to sleep. She indicated that his breathing had started to become irregular at times, with long pauses. He had small doses of morphine and ativan sublingually to ease his breathing, though it is hard to say if those tiny doses did much, or how much was even absorbed.

When I walked in to the room with her, to sit for a while and keep him — and her — company, the breathing pattern was immediately recognizable to me. It was the classic, end-stage pattern of Cheyne-Stokes respirations, the crescendo-decrescendo pattern punctuated by apnea, pauses ranging from 10 seconds to nearly a minute, before the whole pattern repeated. He was not in any discomfort, there was no distress. It bothered us more than him. It also meant that the end was coming soon, some time in the next hours. This is a pattern we see in situations like this where the organ systems are failing and shutting down, leaving the breathing to compensate for the consequences of this decline.

We talked softly, as we kept him company. I kept an eye on the clock on the wall, counting the seconds with each apneic episode, holding my own breath involuntarily. I finally looked at my cousin during one of those pauses—she was doing the same. As we talked I looked up how long it takes a person to die without any food or water, as my experience was always with hospitalized patients and IVs. Google answered me with stats about healthy people, and I imagined a guy crawling towards a mirage in the desert. It took my uncle 8 days, that was the answer.

I have seen plenty of people die, but in the hospital, and that makes all of the difference. Whether in the critical care unit or the trauma bay, or wherever they may be the hospital, Death is accompanied by noise and chaos and bright light and hustle and bustle. As organized as we are with the codes and resuscitations, it is chaotic to an observer. We are fighting death, trying to snatch the person back from its grip, and sometimes Death snatches the person right back. Sometimes we prevail for a while, though, and Death must wait until some other time. “We won”, we think. Even the patients who are hospitalized with a Do Not Resuscitate order are being cared for, and we are trying to keep Death at bay. The hospitalized patients for whom care has become futile, and who are placed on care-and-comfort status, slip away. We lose them. That is how it seems with Death in the hospital, a struggle, with winners and losers.

Death is not like that at home. There is no struggle or fight, it comes naturally and inevitably. The focus is on keeping it comfortable and free of pain, not on preventing it or altering the course. It is quiet, it is peaceful. It is even welcomed. Embracing eternity.

The last breath can be seen as a blessing, the passage into eternity. In the Jewish tradition, the blessing is “May their memory be a blessing”; in the Greek Orthodox tradition, we say “May their memory be eternal.” The dementia had been stealing away my uncle, bit by bit, for years. It is a thief, like an embezzler slowly and insidiously siphoning away a little at a time until nothing is left but a shell. But with death and the sadness and the grief, comes the relief of the burden of illness, and the blessing of memories. The fond memories of times before the illness, in the prime of life, begin to be restored; these are the memories that will be kept and cherished, that will become the blessings that will be eternal.

My cousin and I take up positions on either side of my uncle, unsure if there is restlessness or just more irregularity in breathing. The breathing calms a little as we speak softly to my uncle, we tell him everything is OK, we let him know we are there. His breathing has been stopping and starting, some pauses long, some short, and the time between pauses is variable. No discernible pattern or progression. We brace each time, thinking “is this it?”

His breathing stops again, and again we keep an eye on the clock. 10 seconds, then 30. One minute, then two.

This was it. He is gone.

It is still, quiet and peaceful.

I hug my cousin; we call my other cousin in (her brother), we tell him, and we all hug again. I feel blessed to be there at this sacred time, as my uncle slipped away into eternity.

Now I can remember the uncle I knew over the years, the one I haven’t really seen in quite some time, the one who was stolen away by the dementia. The one we will recall to each other as we regale each other with stories and memories at family gatherings yet to come. That is how the memories become eternal, they live on in the stories we tell and share among family and friends. They become blessings, as the memories transform the person back to their youth and vigor, back to the people we knew and loved.

Eonia i mnimi. Eternal Memory, may your memory be eternal.