“A good surgeon also has to have compassion and humanity, and not be someone who is arrogant and difficult to deal with.” – Dr. Thomas J. Russel (former Executive Director of the American College of Surgeons, New York Times interview) 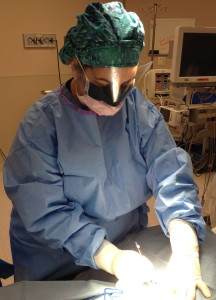 I hear the comments frequently; in fact, I hear them all the time. At work I hear them from staff, from patients — even from non-surgical colleagues. I hear them away from work, when meeting new people who find out that I am a physician and a surgeon. I think many women surgeons hear the same:

The comments tend to run along the same lines. You don’t look like a surgeon. You don’t act like a surgeon. You’re too nice, too caring, too compassionate, too thoughtful, too communicative (sometimes, too pretty). Most of the time, the comments are offered as compliments. They are proffered in a context attempting to make me feel welcomed and appreciated.

I understand these comments are meant as compliments, but what do they say about surgeons? And even more specifically, about women who are surgeons?

We all have stereotypes.  They are a shortcut we all use to help us understand the people and world around us, especially the unfamiliar. But the unfamiliar becomes familiar, and people and groups evolve and change. Stereotypes are mired in ignorance and misinformation, and they help us to resist that change. At that point they do not serve any purpose, and in fact, harm rather than help.

These comments and compliments speak to the stereotypes of who we think our doctors are, what surgeons are like, speaking volumes about the image of surgeons. It is an image as unfair to men as it is to women. The stereotypes color the way surgeons, male and female, are perceived. So no matter what the behavior or intent, the filter of the stereotype colors the perception. This is not only a disservice to the surgeon, it can substitute dysfunction for function on a team, poisoning communication and interaction.

So, what is the surgical stereotype? Do I even have to ask, do I have to even tell you?

“Stereotype Surgeon” is a (usually) white man with a testoserone-infused swagger, confident and brash, charismatic, commanding. Arrogant. Volatile, even bullying and abusive. Aggressive. Cuts first, asks questions later, because to cut is to cure, and the best cure is cold, hard steel. Sometimes wrong, never in doubt. One of the Good Old Boys club. Good with his hands, but no time to explain; compassion and communication are for sissies. There are some positive characteristics, like from this KevinMD post from a medical student’s point of view: “decisive, well organized, practical, hard working,” but then you get “cantankerous, dominant, arrogant, hostile, impersonal, egocentric, poor communicator.” Oh my.

Then there is the Woman Surgeon. Cold, impersonal, moody. Micromanaging shrew, castrating harpy bitch. Bitch, Bitch, Bitch, that seems to be the most common descriptor. Makes the stereotype of a male surgeon seem all warm and fuzzy by comparison. It is cold comfort to share that title with our OB/GYN sisters, and many women in medicine, and women in any profession. It has taken me a long time to realize that it is the title that accompanies any woman in authority, especially with a powerful or critical role. It says more about the person naming than the woman thus named.

I believed the surgical stereotype, too, when I was in medical school. At the end of my second year, we were picking the order of the clerkship rotations for the third year. Although our upperclassmen and subsequent experience told us that the order of the rotations wasn’t that important, we stressed and obsessed about it anyway. I clearly remember the conversation I had with my Dad that spring, as he was driving me home for the weekend. The gist was: I would be doing my surgical rotation first, but that was fine: It was going to be the hardest rotation, and I would get it out of the way. I would learn the ropes of being on the hospital wards, and be well prepared to shine the rest of the year. I knew I would not be a surgeon anyway, so going first wasn’t a problem. Surgeons were all men, chauvinistic and sexist and overbearing, and I (as an enlightened Women’s College graduate) did not want to fight that battle over and over again. Besides that, all of the men in my medical school class who wanted to be surgeons were <<jerks>> (I used a different word), and I did not want to spend the rest of my career surrounded by <<jerks>>. I have been eating these words ever since. (By the way, most of those <<jerks>> did not end up in surgery, after all.)

I was so wrong. My rotation was great. I learned an important lesson about stereotypes, and especially the surgical stereotype. I was forced to revise my impression of surgeons and surgery. I eventually realized that I wanted to be a surgeon myself, and just like the surgeons I had seen.

I would not be here if the surgical stereotype were true. My surgical mentors, male and female, have been among the most compassionate and sensitive of the doctors I have worked with. Thoughtful, communicative, empathetic, respectful to patients and each other. Smart, passionate, enthusiastic. They have been my role models in surgery and in life, good people in and outside of medicine. All of the best characteristics I carry through my career, that I get complimented about, the things that do not seem so “surgical,”  have been reinforced by, if not modeled on, those surgeons around me. My teachers, professors, attendings, mentors, colleagues and peers. I am a surgeon because of them showing me how, not just the surgery and operating, not just the patient care, but by the example of their lives and careers. They are being themselves, empowering me to be my self.

That stereotype of surgeons, and women surgeons, is not me at all. It is hardly anybody.

This stereotypical behavior no longer has a place in modern medicine or surgery. Organized surgery has been working hard to dispel and defuse the old surgical stereotype. There is a very real and tangible effort to identify and eliminate the behaviors that reinforce the stereotype. The stereotypical behaviors are classified as disruptive, and the surgeons who display them are marked as impaired and interventions recommended.

Dr. Wen Shen asserts in her thoughtful piece that the “kinder, gentler surgeon” may be less effective. I disagree.

From burnout and substance abuse to patient care and risk management, the data support the collegial, compassionate surgeon over the bully. Surgeons love their sports analogies, and it is the same when we talk about the surgical team. Surgeons may be the captain of the team, and even occasionally the coach, but must always keep in mind that it is indeed a team, and we depend on the efforts and enthusiasm of that entire team.The importance of team-building and leadership is central to surgery, and always has been. It is even more important as we move into the future form and practice of medicine, and both these behaviors and the perceptions/expectations of these behaviors will not serve. It is the role of the leader to motivate, inspire, lead, educate, guide; not cajole, bully, dictate, humiliate. Data supports the functional, cooperative team model. “Nice” may not be the same as “good”, as the author asserts; but nice and good can and do coexist, and can live comfortably with “confident” and “self-assured”.

Celebrate the surgeons who are compassionate and caring, thoughtful and communicative, meticulous and skilled. Yes, and bright and enthusiastic, hard-working. Detail-oriented. Commanding, assertive, leaders, teachers. We must be all of these, for we must make decisions when there may not be enough time or information before we must act in critical situations, navigating high risk and high pressure. We have to choreograph and then lead the dance that is an operation. We have a strong sense of responsibility for those in our care, to make sure our hard work and the patient’s recovery turn out for the best. Motivating the team, even as we lead them. There is room in the House of Surgery for men and women, and for diversity. This is the new stereotype.

It is also the old stereotype; I am heartened by words that reach out from the 13th century:

It is necessary that a surgeon should have a temperate and moderate disposition. That he should have well-formed hands, long slender fingers, a strong body, not inclined to tremble and with all his members trained to the capable fulfilment of the wishes of his mind. He should be of deep intelligence and of a simple, humble, brave, but not audacious disposition. He should be well grounded in natural science, and should know not only medicine but every part of philosophy; should know logic well, so as to be able to understand what is written, to talk properly, and to support what he has to say by good reasons. – (Chirurgia Magna, 1296, Guido Lanfranchi; Italian-French physician and surgeon who was one of the first to promote learned medicine in medieval Europe, and is regarded as the founder of surgery in France)

So, I will graciously accept the comments as intended, as compliments, but also answer humbly that indeed, I am exactly like a Surgeon.

18 thoughts on “Like a Surgeon: About That Surgical Stereotype”